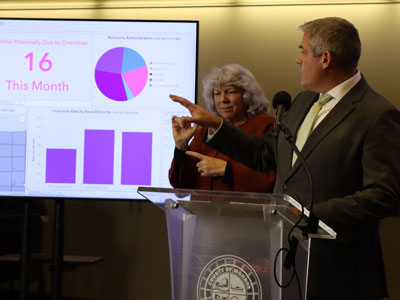 Monroe County Executive Adam Bello today unveiled a new communitywide opioid/fentanyl data dashboard that pulls together real-time information from law enforcement, emergency medical providers and others so partners and community organizations can draw from a single database in the effort to combat the opioid epidemic.

“Real-time accurate data was targeted as job-one by the county’s Opioid Command Center team housed at the Monroe County Emergency Operations Center. The new dashboard and data center will give policy makers, healthcare providers, law enforcement and community-based organizations a common database to build and measure their efforts to combat the opioid and fentanyl scourge plaguing our community,” said County Executive Bello. “One of the goals of the Opioid Command Center is to bring together, help coordinate and measure the many ongoing community opioid efforts and help save lives.”

The latest data on overdose-related deaths reflect a record high. Medical Examiner Dr. Nadia Granger’s 2021 Heroin and Fentanyl Overdose report shows 293 deaths in Monroe County that year attributed in whole or in part to the use of heroin/morphine, fentanyl and/or its analogs. This is an increase in deaths of more than 23% over already record high numbers from 2020. Nearly 30% of 2021 deaths were of members of the African American community and 14% of deaths were members of our Hispanic community.

This report also illustrates the need for more up-to-date data as it is from 2021. The Department of Public Health has begun recording the presence of Fentanyl for every fatality investigated by the Medical Examiner’s office.

The new dashboard will show the positive results as suspected opioid/fentanyl deaths. This will give the community a better ability to track the current situation while much more extensive toxicology tests are being completed and a final report is compiled by the Medical Examiner.

“We launched an effort five years ago to combat the opioid epidemic with the inception of the Monroe County Heroin Task Force, addressing opioid addiction head-on as law enforcement, incorporating prevention and recovery,” said Monroe County Sheriff Todd Baxter. “As we continue, we are appreciative of this new dashboard; a valuable tool in the fight that is public facing, allowing for the coordination of efforts from multiple agencies and information sharing. We are also grateful for the additional support from Monroe County to hire personnel to coordinate these efforts. We need to recognize the very real association between drug use and crime, the two often go hand in hand. For those addicted individuals incarcerated in our jail, we offer help through our Medication Assisted Treatment (MAT) Unit, providing stabilization and a seamless transition out of jail. Addiction PREVENTION remains our key focus.”

“I want to thank the County Executive for prioritizing and funding a dashboard that includes accurate and up-to-date information on the ongoing opioid crisis in our community,” said Monroe County District Attorney Sandra Doorley. “As law enforcement continues to do our part in the prosecution of drug dealers and distributors, it is important to have a centralized hub for the entire community. This dashboard is an excellent step to further collaborate across government agencies, law enforcement, and healthcare providers. I look forward to further combined efforts to attack opioid addiction from all angles to make our community a safer place for all.”

“We have a public health crisis on our hands and, today, County Executive Bello is taking a critical step forward to help us better define strategy, innovate solutions and raise awareness,” said Monroe County Commissioner of Public Health Dr. Michael Mendoza. The more we know about the opioid epidemic in Monroe County, the better we can tailor our response.”

Since taking office, the Bello administration has: