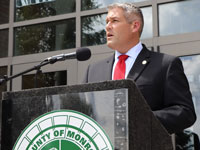 "When I was campaigning for County Executive, I pledged to change the way we do business by taking politics out of County government. This independent, citizen led commission would help ensure lasting openness and transparency in this important process,  taking it out from behind closed doors and removing those with a vested, political interest in the outcome," stated Bello.

The legislative redistricting process is required every 10 years upon completion of the United States Census to ensure equal representation of Monroe County residents. Creating an Independent Redistricting Commission will ensure that the districts are drawn in a nonpartisan manner and will instill confidence in residents that this is a fair and impartial process. In 2014, New York State voters approved a statewide referendum, similar to the measure proposed by County Executive Bello, to form an Independent Redistricting Commission for State Senate and Assembly districts.

"I have talked to countless Monroe County residents who want an independent and nonpartisan process to determine the next 10 years of County government. Our democracy is built on voters picking their representatives, not representatives picking their voters. This is our chance to make real reform to the redistricting process and build confidence in those we represent," Bello added.

The Commission will be tasked with drawing compact, contiguous districts that will seek to avoid dividing Towns, Villages, and neighborhoods within the City of Rochester.  To ensure greater transparency, the Commission will also hold public meetings and at least two public hearings before completing its work. The enacted local law will also be subject to permissive referendum, further increasing public participation in this legislative process.

The proposed measure to create an Independent Redistricting Commission will need to be approved by the Monroe County Legislature. For complete details and to review this proposed local law, click here.