Monroe County, New York, named for President James Monroe, was created from portions of Ontario and Genesee Counties on February 23, 1821. The county already included 28,000 settlers in growing towns and villages that provided agricultural products and market support for the burgeoning mill town known as Rochester. The county seat, Rochester, named for one of its three founders, used the power of the Genesee River to drive the mills and the convenience of the Erie Canal to ship products. Over the years, those products would change from flour to flowers, as the nursery business flourished thanks to the moderating effect of Lake Ontario. Industry would again change the nature of local products to an increasing emphasis on technological innovations, while the county’s towns and villages maintained the agricultural base that nourished growing business.

Today, Monroe County is comprised of 19 towns, 10 villages and the City of Rochester, the third largest city in the state, with a combined population of approximately 750,000 residents and a land area of 663.21 square miles. 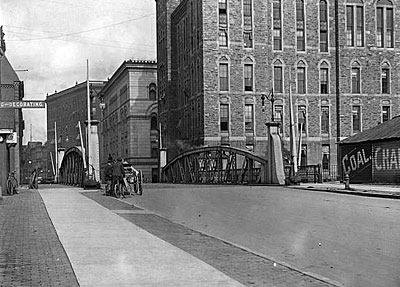 But, more than 200 years ago, the area was largely unsettled; Ridge Road, a mere 12 inches wide, was an Indian path through dense forests. The remaining section of the original Merchants Road, with its nine twists and curves in one mile, reflects its beginnings as the well-traveled Indian link between Canandaigua and the Genesee River. Early settlers included the Algonquin, who were later taken over by the Seneca. The Seneca, who joined the League of the Iroquois, were known as the “Keepers of the Western Door” and controlled trade in all directions. The Indian Landing in Monroe County’s Ellison Park marks where their major east-west and north-south routes intersected. Seneca struggled against both the French and British to retain possession of the area, but once Revolutionary settlers returned home with stories of the good soil available here, settlement began in earnest.

Oliver Phelps and Nathaniel Gorham, land speculators, purchased the area from Massachusetts, who owned the land west of Geneva. Phelps then negotiated a treaty with the Seneca, but they refused to sell the land west of the Genesee River. Phelps convinced them to part with an area 12 miles wide by 28 miles long for the construction of mills on the west side. This area became known as the “mill seat tract” and was the site of the first mill owned by Ebenezer Allan in 1789 (today this site is just west of the Court Street Bridge). Another area further west, created by a correction to the 1790 survey, was known as the Triangle Tract and today includes the towns of Clarkson, Hamlin, and Sweden.

As settlements grew, so did the need for political organization. The area remained divided by the Genesee River, and all the settlements to the east became part of the town of Northfield in 1796. Those to the west of the river were organized into Northampton in 1797. Both towns split as the population rapidly grew. Northfield first became Boyle, from which Penfield split in 1810, then Perinton in 1812, both Brighton and Pittsford in 1814, and then Henrietta in 1818. Later, Irondequoit was formed in 1839 and Webster in 1840. Mendon, created in 1812, had originally been part of Bloomfield and Rush was part of Avon until 1818. These towns were all part of Ontario County, requiring all transactions to be recorded in the county seat, Canandaigua.

Similar divisions were also occurring on the west side of the river as Northampton gave rise to Parma and Riga in 1808, Gates in 1812, Sweden in 1813, Ogden in 1817, Clarkson in 1819, and Greece and Chili in 1822. Union wasn't formed until 1853, and it then became Hamlin in 1861. Wheatland, known first as Inverness, was created in 1821 from land that had been part of Southampton. These towns were all part of Genesee County and settlers had to travel to its county seat, Batavia, to record legal transactions. Increasingly, settlers on both sides of the river wanted a county seat closer to their homes and businesses and began the push for a new county. 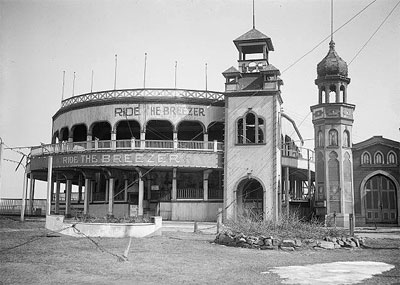 Nathaniel Rochester had carried the first petition for a county along with the request to incorporate the falls settlement in 1817. The Village of Rochester received its charter, but the legislature turned down the idea of a new county. Pressure from leaders in both Ontario and Genesee counties who were anxious to continue to benefit from the rapid growth of the area resulted in petitioners making four more trips to the state capitol before the creation of Monroe County was approved. Rochester petitioned Albany with the help of Elisha B. Strong and this time took his appeal straight to the Senate. The Senate unanimously approved the measure, and on February 23, 1821, the Assembly approved institution of a new county with a 73-27 vote. The county, which covered 675 square miles (430,000 acres), had its first official real estate transaction on March 19, 1821, although it was not recorded until April 6, 1821.

The original 14 towns in Monroe County—Brighton, Gates, Clarkson, Henrietta, Mendon, Ogden, Parma, Penfield, Perinton, Pittsford, Riga, Rush, Sweden, and Wheatland—each elected supervisors who were present at the first Board of Supervisors meeting on May 8, 1821.

The 43-member Board of Supervisors was the governing body of the county for the next one hundred and forty-five years until the Supreme Court one man-one vote ruling led to the creation of a 29-member County Legislature. Meetings were held in taverns or borrowed space in City Hall until a county courthouse was completed. Land for the first courthouse was donated by founding fathers Rochester, Fitzhugh, and Carroll who wanted the important business and legal site to be near their tracts on the westside of the River. The County Office Building, at 39 West Main Street, is on the same site where the cornerstone for the first courthouse was laid on September 4, 1821. A second courthouse was built here, but was razed when it became too small to accommodate the county courts and offices. Begun in 1894, the third courthouse (current County Office Building) celebrated its centennial with the creation of an exhibit on its history. A unique example of the Italianate style of architecture, a style not frequently seen in public buildings, the building’s impressive staircase and marble still inspire. The second floor also offers visitors the chance to see the original millstones from Allan’s mill. 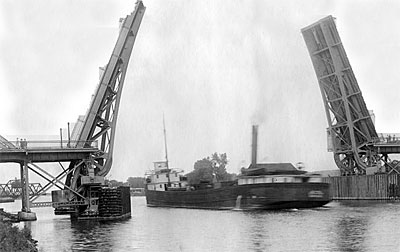 Waterways have always been central to the development of Monroe County. The port of Charlotte was part of the customs district created by Congress on March 3, 1805 and the first lighthouse, which still stands today, was built in 1822. Trade along the river was hampered by the three falls, which required the portage of goods at spots like Handford’s Landing and the settlement of Carthage at the lower falls. The desire to link north-south trade to the potential of larger east-west trade had spurred the idea of a canal. The first ideas for a canal came from articles written by Jesse Hawley in Canandaigua’s General Messenger in 1807 and 1808. After an initial survey, it was found that the best route would bisect Rochesterville. This first proposal, known as the North Route, was approved after much debate.

Planned in three sections, construction on the middle part of the canal began on July 4, 1817 in Utica and moved westward. In 1821, the Canal reached Bushnell’s Basin, which was the western terminus for the next two years. The canal eastward from Rochester to Albany opened in 1823 and the westward link to Buffalo opened in 1825. Locally, an aqueduct was constructed in 1823 to carry the canal over the river and enhance access throughout the city. A second aqueduct, built in 1842, now supports the Broad Street Bridge.

The canal fostered the phenomenal growth both Rochester and the surrounding area was already experiencing. By the 1830s Rochester had 10 flourmills and nine sawmills and 160 canals boats operating out of the city. Mills dotted the landscape of the county, from Zebulon Norton’s grist mill built on Honeoye Creek in 1792 to similar enterprises in Scottsville, Pittsford, and Chili which relied not only on the harvests of local farmers, but also imported Canadian crops to meet the increasing demands. Along with trade, the Canal brought people in record numbers. In 1820, the federal census reported that the population of the county was 26,855; by 1830, it had risen to 49,862 and had toppled over 60,000 by 1840. This rapid expansion reflected the opportunities for employment and entrepreneurship that the river and canal provided residents and new arrivals. The 2000 Census reported a population of 735,343 in Monroe County.

In response to the canal’s success, construction of another canal that would connect the fertile land to the south along the Genesee River to the Erie Canal was begun in 1837. The Genesee Valley Canal ran from Rochester to Olean, but was never finished until 1856, by which time it was obsolete. The appearance of the railroads would decrease the reliance on canal shipping everywhere, leading to abandonment of many, including the Genesee Valley. In 1880, it was sold to the Genesee Valley Canal Railroad company (later the Western New York & Pennsylvania). 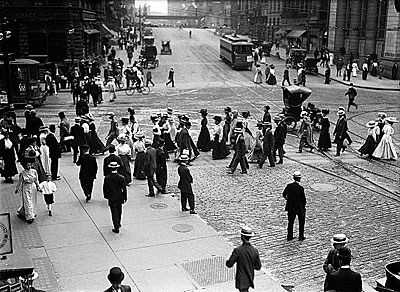 From its early agricultural and milling start, the county has developed into a modern center for high-technology industries, manufacturing, education, medicine and exports. Monroe County is home to the World Headquarters for both the Eastman Kodak and Bausch & Lomb Corporations and to manufacturing facilities such as General Motors, Xerox, and ITT Automotive. On a per capita basis, Monroe County’s industries export more manufactured goods than any other community in the United States of America.