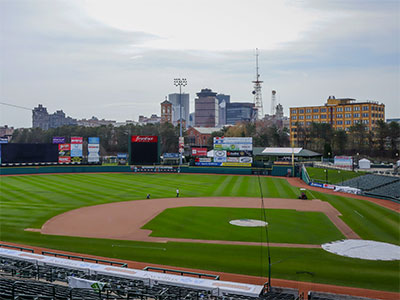 or a quarter century, Frontier Field and the Rochester Red Wings have provided baseball fans with a top-notch game day experience,” said Empire State Development Acting President, CEO & Commissioner Hope Knight. “These county and state-supported stadium updates will make ballpark outings even better, for residents and visitors alike, and for generations to come.”

The $11 Million Facility and Patron Improvements include amenities such as bistro table seating to expand options for ticket sales, a new kitchen facility, a 360 concourse that would add a pathway around the outfield allowing fans a more intimate experience and improved picnic and patio areas.

New York State and Monroe County lawmakers made the upgrade of Frontier Field a priority.

New York State Senator Jeremy Cooney: “Summer nights with the Red Wings at Frontier Field are a cherished tradition in Rochester. I am proud to deliver critical funding to ensure one of the nation’s oldest baseball teams has a stadium ready to welcome the next generation of fans. I want to thank Monroe County Executive Adam Bello for his partnership and work to upgrade Frontier Field, and the Silver family for their long-standing commitment to our community, and all that they do to support and grow the Greater Rochester region”.

New York State Assembly Member Demond Meeks: "I am glad that my state colleagues working in partnership with Monroe County Executive Adam Bello and his team were successful in securing this important funding for Frontier Field. Baseball has been a long- established pastime for Greater Rochester. Thousands of our families and residents come together at this stadium every year to celebrate and share their love of the game and many other forms of entertainment such as live concerts. It is essential that we continue to maintain the safety and reliability of Frontier Field as a centerpiece within our community."

New York State Assembly Member Harry Bronson: “Frontier Field is a staple of the Greater Rochester Area. Generations of fans have grown up watching ball games downtown with friends and family. This funding will be used to improve the experience at Frontier Field so the next generation of fans can make memories while watching our Red Wings. Our Greater Rochester Area State Delegation in partnership with Governor Hochul and County Executive Bello was proud to deliver this funding for our families here in Monroe County.”

New York State Assembly Member Jen Lunsford: "Baseball has been at the heart of Rochester for 123 years. That's why I am so proud we in the state delegation were able to secure critical funding to make long-needed improvements to Frontier Field that will enhance the fan and player experience, align the stadium with Major League Baseball's requirements for MLB ballparks, and ensure that baseball stays in Rochester for another century! Frontier field is not just an economic driver for downtown Rochester, it is the unofficial home of summer, where hundreds of thousands of families across the region, including my own, create memories and celebrate traditions."

New York State Assembly Member Sarah Clark: “Bringing businesses, families, and entertainment into Rochester is crucial for our economic viability. Upgrading Frontier Field to align with MLB stadium standards will cement Rochester’s downtown as a prime destination for Rochester residents and visitors alike. This investment from the state into Rochester’s entertainment will ensure the Red Wings remain an institution for our families for years to come. I am grateful to my colleagues in the legislature and our Governor for ensuring that our state budget includes funding to improve our local treasures.”

Monroe County Legislature President Sabrina LaMar: "I am happy to support the improvement of fan amenities at Frontier Field. The Rochester Red Wings are a Rochester institution, and many great baseball players have played here on their way to the major leagues—some to the Baseball Hall of Fame. Improving the fan experience will ensure that the Red Wings will remain a viable franchise in perpetuity because of its strong fan base.”

Monroe County Legislature Assistant Majority Leader Paul Dondorfer: "Supporting the improvement of fan amenities at Frontier Field will continue to build the Rochester Red Wings as a staple of our community and example for others. As I first learned as a Grounds Crew member at Silver Stadium, the Rochester Red Wings bring tremendous value to our residents and visitors from all over - I'm proud to continue supporting local baseball in Rochester."

Monroe County Legislature Minority Leader Yversha Roman: “The Red Wings have been a Rochester institution and tradition for more than 120 years. This investment in the stadium will ensure the team is in line with major league standards and keep the tradition going for many years to come.”

Naomi Silver, President and CEO of the Rochester Red Wings: “We are so grateful to Governor Kathy Hochul, our local New York State Delegation, the Monroe County Legislature and to County Executive Adam Bello for making the upkeep and upgrade to Frontier Field a priority. We serve a vast cross-section of the community and with these facility improvements we will provide the new amenities fans look for.”

The $10-million grant in this year’s New York State Budget combined with the existing $2.5 Million grant received from NYS will total $12.5 Million from the state in support of the $26 Million overall budget for Frontier Field improvements.

The Frontier Field Facility and Patron Improvements Project legislation submitted by the County Executive will expand the county’s Capital Improvement Budget and accept the $10 million NYS grant. The current Project Labor Agreement (PLA) already negotiated for the ongoing work at Frontier Field will also cover the expanded project. The work is scheduled for completion by April of 2025, in time for opening day.