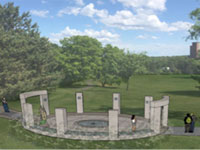 Monroe County Executive Adam Bello, along with several local elected officials and representatives from the veterans community, will break ground on the War on Terror Memorial at Highland Park during a virtual ceremony on Monday, May 25. The public is unable to attend the ceremony due to COVID-19 restrictions on large gatherings. However, the ceremony will be broadcast live on local television stations and streamed on the County Executive's Facebook page beginning at 11 a.m.

"Though it is essential to maintain physical distancing to keep our community safe on Memorial Day, it is also important to honor and reflect on the great sacrifices made by the men and women who died while serving in the U.S. military and their loved ones," Bello said. "With this special ceremony, Monroe County is not only paying tribute to those who fought against terrorism, but to every local soldier who did not make it back home."

The War on Terror Memorial will recognize the memory of service members from Monroe and surrounding Counties who bravely lost their lives in U.S. military conflicts from 1990 through current times. It will be located southeast of the Vietnam Veterans Memorial of Greater Rochester in Highland Park. Construction is expected to begin next spring.

The new memorial will feature 10 concrete columns that display military emblems. Five emblems represent the branches of the military, one emblem represents the Prisoners of War and service members Missing in Action, and four emblems commemorate the Gulf War, United Shield in Somalia, Enduring Freedom in Afghanistan and Iraqi Freedom. The centerpiece of the memorial will be a life-sized battlefield cross statue depicting the boots, gun and helmet of a fallen soldier on a raised pedestal.

"The War on Terror Memorial has been years in the making and involved the strength and advocation of many of Monroe County's most dedicated veterans.  Breaking ground on Memorial Day is especially fitting," Robach said. "This memorial will be a place for our community to gather to reflect on the brave service of those who defended freedom in the War on Terror.  When completed, this memorial will ensure their heroic actions will never be forgotten and always honored."

In addition, the Vietnam Veterans of America and the Warriors of Freedom Memorial Committee contributed to the design, construction and maintenance costs of the memorial.

Dan and Rita Hasenauer of Hilton will be among the participants in Monday's televised ceremony. The Gold Star parents lost their 21-year-old son Army Pfc. Jason D. Hasenhauer in 2005, while he was serving in Afghanistan. They also serve on the War on Terror Memorial Committee.

"This memorial will be a beautiful setting for our family and friends to remember our son Jason and those that served with him," the Hasenauers said.

The Monroe County Parks Department will perform routine upkeep and maintenance of the Memorial. The Memorial Committee continues to raise funds for an endowment that will pay for any significant future repairs.