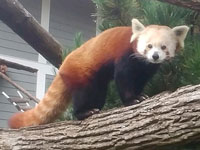 Monroe County Executive Adam Bello and Seneca Park Zoo officials announce the arrival of a male red panda named Willie who will join the Zoo’s female red panda, Starlight.  Willie’s arrival is based on a recommendation from the Association of Zoos and Aquariums (AZA) Species Survival Plan, a coordinated initiative to plan for and manage the breeding of animals across all AZA-accredited zoos to ensure genetic diversity and species sustainability in human care.

“The Seneca Park Zoo continues to be one of our community’s most visited tourist attractions, with thousands of people and families visiting nearly every day. The red pandas have been such a terrific addition to the Zoo and have quickly become a favorite for guests of all ages,” said Bello. “It’s exciting to think about the prospect of red panda cubs in the Zoo’s future.”

Willie, a five-year-old male, comes from Zoo Knoxville. He was born at the Greenville Zoo in South Carolina, and was reportedly named after Willie Nelson, specifically an album called Red Headed Stranger.   Despite the origin of his name, Willie is distinctive from Starlight based on his predominantly white face, while Starlight’s face markings are redder.

“We are excited for Starlight to have a mate,” commented Interim Zoo Director David Hamilton, “Willie’s arrival is at the perfect time, as Starlight is now old enough to reproduce. What’s more, red pandas love cooler weather, so it’s a great time for guests to visit.”

Red pandas are native to foothills of the Himalayan Mountains.   They are listed as Endangered by the International Union for Conservation of Nature (IUCN) red list, because their population, thought to be less than 10,000, has declined by 50% in the last 20 years

“We are so happy to welcome Willie as an ambassador for his species,” commented Pamela Reed Sanchez, President and CEO of Seneca Park Zoo Society.  “Since the introduction of red pandas to Seneca Park Zoo in 2018, the Zoo has been an active supporter of Red Panda Network, providing grants from special fundraising efforts to restore and reforest the Red Panda Protected Forest.”

The Zoo is open daily and timed tickets are required.  They can be purchased at senecaparkzoo.org.