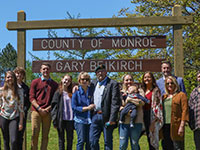 Monroe County Executive Adam Bello was joined today by Congressional Medal of Honor Recipient and Vietnam War Veteran Gary Beikirch and the Beikirch family to dedicate and rename a portion of Highland Park in honor Mr. Beikirch. The area, commonly referred to as Highland Park South, encompasses the Vietnam Veterans Memorial and the future location of the War on Terror Memorial. The measure to rename this portion of Highland Park was unanimously passed by the Monroe County Legislature at its March meeting.

“Gary Beikirch is an American hero in every sense. His selfless acts on behalf of our country will live on forever in the hearts and minds of our community, and all of those who have gotten to know Gary throughout his life,” said County Executive Bello. “Renaming this portion of Highland Park, between the Vietnam Memorial and the future War on Terror Memorial, in Gary’s honor is a perfect tribute to this incredible man who has dedicated his life to Monroe County and the United States. I hope that people will take time to hear Gary’s story and learn about the sacrifice he made after visiting this newly renamed section of Highland Park.”

Gary Beikirch served in the Vietnam War as a medic with Company B of the 5th Special Forces Group, where he was stationed at Dak Seang Camp with Montagnard villagers and fighters in Kon Tum. On April 1, 1970 the camp was attacked by a larger North Vietnamese force. Beikirch fought back until he learned a fellow American was wounded and in an exposed position. While moving through enemy fire to reach him, a piece of shrapnel struck Gary in the back, partially paralyzing him.  For the remainder of the battle, Gary was carried from position to position to administer aid to fellow wounded allies. Later in the fight, while giving a Montagnard fighter resuscitative mouth-to-mouth, he was wounded in the side and then shot in the stomach. Gary continued to fire his weapon and provide medical care from his stretcher until he was evacuated by helicopter. He would spend the next six months recovering at Valley Forge Medical Center.

“It is also my hope that as people enter this park and walk among the heroes that are honored and remembered here that they will hear each hero say to them… ‘There is a different way to live your life. Live your life believing that there is something greater in life than me. Live your life caring for others… loving others. Greater love has no one than this… that you would lay down your life for your friend,” added Beikirch.

On October 15, 1973, Beikirch was awarded the Congressional Medal of Honor, the United States Military’s highest decoration for service, for his actions at Dak Seang. He was also presented with the Distinguished Service Cross, Silver Star, Bronze Star Medal, two Purple Hearts and the Vietnamese Cross of Gallantry.

In his post-military life, Beikirch attended White Mountain Seminary in New Hampshire and became a Pastor. He eventually received a Masters Degree in Counseling and finished his professional career as a Guidance Counselor at Greece Arcadia Middle School.