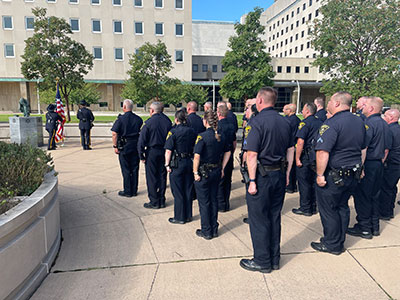 Monroe County Executive Adam Bello today proclaimed the upcoming week of September 19-25 as Sheriffs’ Week, to highlight and thank the Monroe County Sheriff’s Office for its work to keep the community safe.

“From our roadways, to our courts and jail, and so much more, the Monroe County Sheriffs’ Office works tirelessly to protect our community,” said Monroe County Executive Adam Bello. “I am proud to proclaim the week of September 19-25 as Sheriffs’ Week here in Monroe County to highlight all the important work being done by Sheriff Todd Baxter and his team.”

The Monroe County Sheriff’s Office was formed in 1821 with the appointment of Brockport merchant James Seymour as the first Sheriff.

Sheriff Todd K. Baxter currently serves as the 50th Sheriff of Monroe County. Sheriffs are the only law enforcement officials in the state to be directly elected by their constituents. As elected officials, they are directly accountable to the people of the community in which they serve. The Sheriff is the highest ranking law enforcement officer in the county, and in many counties throughout New York State, is also the principal source of police protection. The Monroe County Sheriff’s Office has five bureaus, to include, Road Patrol, Jail, Court, Civil, and Staff Services.

“As we proudly mark this annual occasion, Sheriffs Week takes on even more significance this year as we celebrate our Bicentennial,” said Monroe County Sheriff Todd K. Baxter.  “200 years since our founding in 1821, our people remain our greatest asset.  I am grateful to the men and women, both sworn and civilian staff, who answer the call and the calling to serve and protect our community while living our core values of Respect, Integrity, Teamwork and Excellence.  Whether in the jail, in the courts, on the road, in an emergency, or just to stop and say ‘hello,’ we are in the community and there’s nowhere else we’d rather be.”