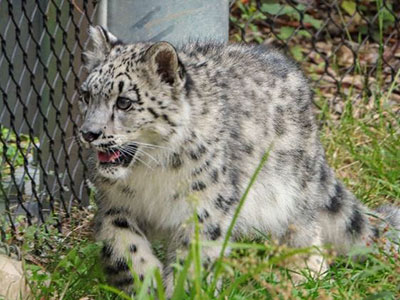 Kenji is a name of Japanese origin, meaning “strong and vigorous.”

Monroe County Executive Adam Bello announced the winning name of the six-month old snow leopard born in April at Seneca Park Zoo. With nearly 45% of the vote, the winning name was Kenji — pronounced KEN-gee — a name of Japanese origin that means “strong and vigorous.”

“Thank you to the more than 2,000 residents who voted in our snow leopard cub naming contest,” said Monroe County Executive Adam Bello. “While Kenji needed intense care and attention from our team at the zoo after he was born, with their help he has developed into a rambunctious, playful and thriving young snow leopard. A strong and vigorous young cat, Kenji is a truly fitting name.”

Born hypothermic and dehydrated on April 16, Kenji was hand raised by Seneca Park Zoo Assistant Director for Animal Care and Conservation Dr. Louis DiVincenti and other zookeepers. In the following weeks, the cub successfully recovered from a respiratory infection and has since grown into a happy, healthy snow leopard.

amazing animal,” said Zoo Superintendent Steve Lacy. “Kenji will be a fantastic ambassador for snow leopards, and has already inspired

thousands to take part in ensuring these animals will thrive in both zoos and their natural environment for years to come.”

Kenji is the second litter from parents Timila and 10-year-old male Kaba who were paired as a result of a breeding recommendation from the Association of Zoos and Aquariums’ Snow Leopard Species Survival Plan (SSP).

The Snow Leopard Trust estimates there may only be between 3,500 and 7,000 snow leopards remaining in the wild and their general population is thought to be decreasing. There are approximately 600 snow leopards in zoos around the world.

Zoo staff will work with the SSP to identify the best opportunity for Kenji. To learn more about snow leopard conservation, visit SenecaParkZoo.org.