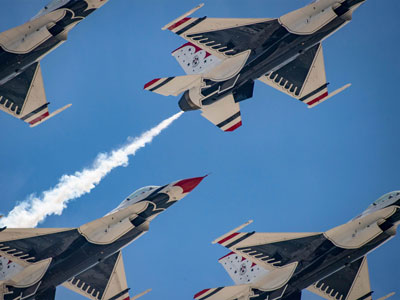 Thunderbirds will make their return to ROC for the first time since 2019.

“The United States Air Force Thunderbirds have always put on an incredible show for residents, visitors and families of our region, I am certain that 2023 will be no exception,” said Bello. “From their patriotic military salutes, to the spectacular lineup of aerial performances and static aviation displays, the Airshow will have something for everyone and will be yet another major outdoor entertainment attraction for our community in 2023.”

ROC has been fortunate to host the Thunderbirds four previous times in the last 16 years when they were the featured act at ROC Airshows in 2005, 2008, 2014 and 2019. The Thunderbirds are the official air demonstration team of the United States Air Force and are stationed at Nellis Air Force Base in Nevada.

Each year, the Department of Defense receives hundreds of requests to hold airshows. ROC was selected by the Thunderbirds at the recently held International Council of Airshows (ICAS), where the team released its two-year schedule earlier today.

Further details on the 2023 Airshow will be available early next year. The Thunderbirds complete two-year schedule can be found at www.afthunderbirds.com/.