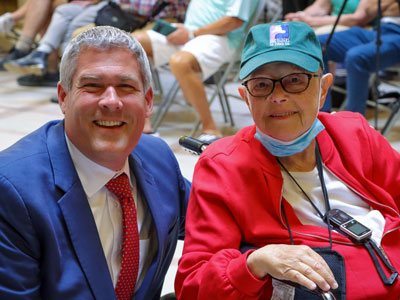 “Evelyn Bailey’s efforts to ensure the stories of our LGTBQ+ residents who fought for equality, health care, marriage and the right to live their authentic lives will live on forever,” said County Executive Bello. “Bailey is a trailblazer and pioneer. We proudly and loudly celebrate our local LGTBQ+ community thanks to her lifelong efforts.”

Bailey, of Webster, joined the Gay Alliance of The Genesee Valley/Out Alliance in 1985. She held numerous leadership roles there, and as the organization’s historian, digitized the archives of The Empty Closet – the oldest continually published gay newspaper in New York.

Well known as a storyteller, Bailey spearheaded efforts to develop the Shoulders to Stand On (STSO) project. The Shoulders to Stand On documentary film premiered to a sold-out crowd at the 2013 ImageOut Film Festival and the project soon became a movement that expanded into an educational series and comprehensive effort to document and preserve the history of Rochester’s LGBTQ+ community and its impact on advancing LGBTQ+ equality in New York State and the nation.

Bailey, a 30-year mathematics educator and small business owner, has previously been recognized with the 2014 Community Service Award from the Empire State Pride Agenda and the 2014 Community Leadership Award in Education form the Greater Rochester Branch of the American Association of University Women. In 2014, she was Grand Marshal of the Pride Parade.

"Evelyn and I have taken so many journeys together”, said Assemblymember Harry Bronson. “Some of our travels have been challenging but with Evelyn you know it will be an educational adventure. I am so pleased to be here today as County Executive Bello honors my friend in such an appropriate way and a very appropriate time; Pride Month and the anniversary of the Stonewall Riots. Being here with Evelyn reminds me how grateful I am to have such strong shoulders to stand on.”

“Celebrating Pride Month means celebrating the many courageous and resilient LGBTQ+ Americans who have made our community a better place, like Evelyn Bailey,” said Congressman Joe Morelle. “She has been a steadfast leader and tireless champion of LGBTQ+ rights for decades. I am proud to recognize her for her longstanding advocacy, and I look forward to continuing to work alongside activists like Evelyn to fight for the dignity, equality, and respect all people deserve, regardless of how they identify or who they love.”

Monroe County will celebrate local Pride starting with a flag raising ceremony at noon, July 7 at the County Office Building, 39 W. Main Street. The Frederick Douglass Greater Rochester International Airport and the Central Library of Rochester and Monroe County will be lit in rainbow colors for the occasion.

For the first time, Monroe County is sponsoring Pride celebrations and will have a presence during several events presented by Trillium Health and the ROC Pride Collective throughout the month of July:

A full list of Pride events throughout June and July can be found at trilliumhealth.org/patient-and- community-services/pride-2022/events.