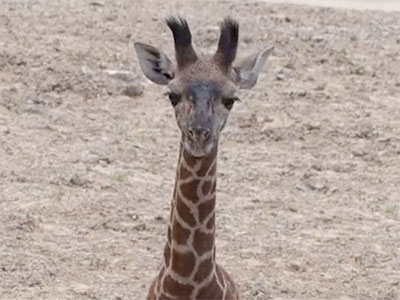 County Executive Adam Bello today announced Seneca Park Zoo’s baby Masai giraffe is named Olmsted in honor of Frederick Law Olmsted, designer of Seneca Park. Staff at the zoo call him “Olmy” for short. He was born on April 29, 2022 to mom, Iggy, and can now be viewed by zoo guests at the Animals of the Savanna exhibit during regular park hours.

“Olmy is growing stronger and more curious each day thanks to the incredible care provided by our veterinarian and staff at the zoo," said Monroe County Executive Adam Bello. “This year is the perfect opportunity to honor Frederick Law Olmsted as we celebrate his 200th birthday – ensuring a bit of Monroe County history follows wherever Olmy may go.”

“Seneca Park Zoo is fortunate to have an incredibly dedicated team providing world class care for our animals,” said Steve Lacy, Superintendent of Seneca Park Zoo. “Their hard work has helped ensure the success of this momentous first giraffe calf. To honor the brilliant designer who planned the beautiful park the calf calls home, the giraffe team chose the name Olmsted to celebrate the calf's arrival.”

With Olmy’s birth, the zoo is now home to four Masai giraffes; two males, Parker and Olmy, and two females, mom Iggy and Kipenzi. Masai giraffes in the wild are on The International Union for the Conservation of Nature (IUCN) “Red List” as they are endangered due to scattered and fragmented populations that have resulted from poaching, habitat loss and human encroachment.