The Irondequoit Bay Outlet Bridge (IBOB), located at the north end of Irondequoit Bay, spans the outlet between Lake Road in the Town of Webster and Culver Road in the Town of Irondequoit. Annually, the bridge is swung into place for use by motorists 5 months out of the year (November 1 - March 31) and swung away in to storage to open the channel for boaters 7 months out of the year (April 1 - October 31).

The current seasonal bridge was designed to span the bay outlet for vehicular traffic during the winter months. Throughout the summer boating season, the bridge is removed to accommodate marine traffic.

IBOB is maintained and operated by the Monroe County Department of Transportation (DOT). County DOT operates the bridge in conformity with permits granted by the United States Coast Guard.

When and how IBOB operates

Each year, the bridge is scheduled to swing to the in-storage position (open to boaters) on April 1st, after 9:00 am, and to the in-use position (open to vehicular traffic) on November 1st. If either date happens to fall on a weekend day, then the bridge swinging may be moved to the Friday before or the Monday after the weekend. These dates are determined annually by the US Coast Guard.

This operation is carried out by the Monroe County D.O.T. bridge maintenance crew and regulated by the U.S. Coast Guard, Cleveland Office. For more information, continue reading the detailed write-up below. For any additional questions or to request for a copy of the IBOB informational pamphlet, call 585-753-7720.

A Vital Link Between Irondequoit and Webster

In the early 1900s, the shallow channel was crossed by a narrow truss highway bridge and a single track railroad line. Around 1929 the bridge was replaced with a two–lane structure supported on timber piles. The timber bridge remained in service until August 14, 1985, when it was removed as part of an Army Corps of Engineers project that opened the Irondequoit Bay to marine traffic from Lake Ontario and created a state park at the bay outlet, to spark development in the bay.

The Irondequoit Bay Outlet Bridge came to be after several studies were carried out to determine the best way to traverse the bay outlet. The consultant determined that a low–level removable or “seasonal” bridge spanning the channel four months of the year was the only viable alternative that could be constructed with the remaining funds, after the allocated $20 million for a high level bridge was diverted to the California earth quake relief in 1994. Monroe County Legislature approved the $4.8 million project in 1997.

Included in the $4.8 million was the renovation of the nearby Irondequoit Bay Marine Park and the building of a Bobtail Swing Truss Bridge, plus engineering fees.

The two–span swing structure has a main span of 132.5 feet and a counter–weighted span of 53 feet. The pivot point of the bridge is on the west bank of the channel.

This operation is carried out by the Monroe County D. O. T. bridge maintenance crew.

Swing bridge machinery was adapted to fit the seasonal nature of the structure, providing a simple, but effective operating system. A conventional pivot bearing and balance wheel ring system is used to swing the balanced structure. 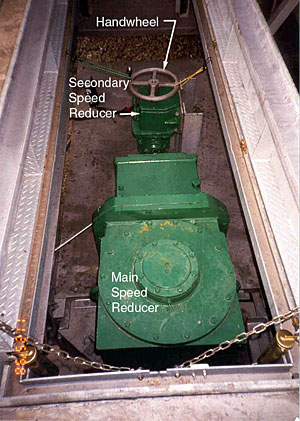 The operating equipment consists of a single pinion mounted at the end of the back span, guided on a circular track. A portable electric drill drives the pinion through a pair of reducing gears. Standard portable hydraulic jacks (two 100 ton, for the west and south, two 50 ton for the east and north) are used to lift the structure in order to remove bearings at each end of the bridge. Two 300-ton hydraulic jacks, permanently mounted to the underside of the pivot beam, are used to lift the truss in order to remove the bearings at the pivot point.

For the spring operation, jacks are placed snugly at each abutment and raised slightly to relieve the load on the bearings. The east end is jacked up first, then the west end. In the next step, the bridge pivot beam is jacked up and the bearings removed. With bearings out of the way, the bridge is lowered on the main pivot bearing. Finally, the east and west bearings are removed respectively and now the bridge is free to swing. Total deflections are approximately four inches at the end of the long span and two inches at the end of the short span. At this point the bridge is turned, using the drill. Upon completion of the turning of the bridge, the sequence of actions is reversed to set the bridge back on the bearings.

The same process is followed in the fall.

The American Galvanizers Association awarded the bridge the 1999 Excellence in Hot Dip Galvanizing Award as the Most Distinguished Project.