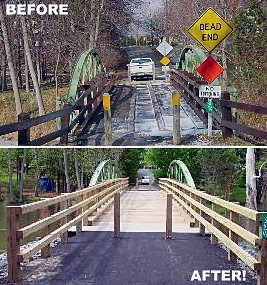 The Stuart Road Bridge is one of nine landmark structures on the State and National Register of Historic Places designated in the Chili Mills Conservation area. The Stuart Road bridge is the oldest bridge in service in Monroe County which is open to pedestrian traffic.

On February 22, 1822, the New York State Legislature voted to provide money for a bridge by Sibley’s Mill (now Chili Mills, located in West Chili). On June 29, 1877 the Chili Town Board voted to spend One thousand six hundred dollars ($1,600.00) to build a new bridge across Black Creek at Feely’s Mill. The bridge was built in the late summer and fall of 1877. Christopher Feely owned Chili Mills between 1875 and 1892. The King Iron Bridge Company manufactured the bridge. The entire bridge was sent on rail then traveled to the site on wagons. A King Bridge Company agent, Mr. Twiss from Cortland, N.Y. supervised the entire operation. Town forces including masons and carpenters, assembled the bridge in its current location in Summer and Fall of 1877.

A rehabilitation project to improve and repair the bridge structure began on January 22, 2002 and ended on May 1, 2002.

Why the Project Was Needed

The wooden deck of the bridge started to deteriorate to the point that is was not feasible to repair it any longer. The wood was dry rotted, and spongy over 50% of the deck. This caused the bridge to be unsafe for pedestrian traffic. The bridge also had raised runner planks which was added for use by vehicular traffic. This was also in need of repair. The handrails were not up to current safety standards as well.