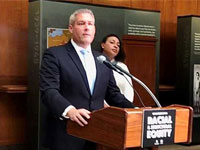 Community Members Interested in Serving on Commission Should Submit Resumes to RacialEquityCommission@cityofrochester.gov by July 10

Mayor Lovely A. Warren and County Executive Adam J. Bello announced today the creation of the Commission on Racial and Structural Equity (RASE) to examine and develop policies and legislation to overcome systemic and institutional inequities, as well as, racism in Rochester and Monroe County. The Commission will meet Governor Cuomo's mandate regarding a review of policing policies, and go beyond that to review the state of education; healthcare, including mental health and addiction services; job creation, business development; as well as other social services. The Commission will have six months from formation to report back to the community.

"We need to seize this moment and fundamentally change our government to lift up all people, specifically, our Black and Brown residents. By doing so, we will deliver equity and strengthen our entire community,” said Mayor Warren. "This Commission will be empowered to deliver to policies and legislation we can enact to ensure that we do more than simply police our community in a more humane manner. We must rethink, change and expand how government at all levels provides services to truly ensure every family and every child has full access to the American Dream.”

"This is an historic moment in Monroe County, and we will not let it pass without consequence,” Bello said. "We are here to make lasting changes to our systems thatfor far too long have perpetuated inequities that disproportionately affect people of color across our community. This commission is just one step toward rebuilding Monroe County as an actively anti-racist government that embraces diversity and inclusion.”

The Commission will have 21 members selected by the Mayor and County Executive with input from the Co-Chairs. The goal is to invite community members and subject matter experts from the community who have led on these issues to provide recommendations in the policies areas of education; healthcare, including mental health and addiction services; job creation, business development; as well as other social services. Individuals interested in serving on the Commission should submit their resumes and a statement explaining why they wish to serve via email at RacialEquityCommission@cityofrochester.gov by 5:00pm on Friday, July 10. The Commission will be charged with taking testimony on the above topics from all interested residents. Ultimately, it will submit policy directives and proposed legislation to both the City and the County to address the systemic and institutional inequities that exist in our community.

Former Mayor Johnson and Dr. Muhammad Shafiq as Co-Chairs are charged with developing the formal structure of the Commission's operations. City Chief Equity Officer Dr. Cephas Archie and Deputy County Executive Corinda Crossdale will lead a cross government team to provide staff support and resources for the effort. The Commission will release additional details on its operations in the coming days.

Since moving to Rochester in late 1972, William A Johnson, Jr. has been active in a number of important initiatives to improve the overall quality of community life. He is widely known as the President and CEO of the Urban League (1972-1993), the 64th Mayor of Rochester (1994-2005), and the Distinguished Professor of Public Policy and Urban Studies at RIT (2006-2013). Since retiring in 2013, he has been the Founder and CEO of the consulting firm, Strategic Community Intervention LLC.

He has been at the forefront of several local policy and social issues. He served on a Citizens Committee on police reform, appointed by the City Council in the mid-1970's following the police killing of a young Black woman fleeing domestic abuse. That commission made a number of policy and practice recommendations on policing that were voted into law and incorporated in the RPD's operations manual. In the 1980's, the Urban League led two major educational reform initiatives, regarding violent and disruptive behavior in schools; and for overall performance improvements of schools and students. The latter was the much- heralded Call to Action, which achieved national recognition as a school reform model. He served 10 years on the City Civil Services Commission, to help the RPD develop strategies and programs to increase minority representation in its ranks.

During his Urban League career, he often consulted with other League affiliates across the nation on the education reform strategies being pioneered in Rochester.

In the early 1990'a, the ULR led a collaborative campaign to "eradicate racial polarization in Greater Rochester”. The key outcome was that more than 10,000 citizens signed a Pledge Card to not engage in racist behavior, and to confront others who did.

He continued that work as Mayor, with the initiation of the Bi-Racial Partnerships, which developed methodologies for cross-racial communications and collaboration. That program led to an Islamic Partnership, working closely with Dr. Shafiq and the Islamic Community, to confront and counter anti-Muslim hostilities that erupted in the aftermath of November 11, 2001.

Confronting the need to implement major reform of the Police Department, Mayor Johnson hired three chiefs during his three terms to design, implement and sustain an effective Community-Oriented Policing model, to more effectively and honestly engage with the African-American neighborhoods, and to increase citizen engagement in all aspects of city operations. The Neighbors Building Neighborhoods (NBN) and the Neighborhood Empowerment Teams (NET) resulted from that vision of citizens and government working together.

Johnson completed training in 1985 to become a PERB-certified Mediator and Factfinder, and he has effectively deployed those skills in his professional duties and consulting work with government clients. In the past two years, he has worked closely in a southern city to help citizens and police overcome their mutual antipathies, and in a Midwestern city which has been roiled by the introduction of White Nationalism in a major community institution.

He holds B.A. and M.A. degrees in political science from Howard University. He has taught political science and public policy courses at two other colleges. He has published more than 3 dozen articles on issues of racism, equity and inclusion in major publications.

Dr. Muhammad Shafiq is the executive director of the Brian and Jean Hickey Center for Interfaith Studies and Dialogue and professor of Islamic and religious studies at Nazareth College. He also holds the IIIT Chair in Interfaith Studies at Nazareth College. He was the imam of the Islamic Center of Rochester, Inc. until 2007. Dr. Shafiq holds a Ph.D. from Temple University, and a M.A. and B.A. from the University of Peshawar.

Dr. Shafiq has written more than 40 articles and several books, including Interfaith Dialogue: A Guide for Muslims (International Institute of Islamic Thought: second edition 2012). His article addressing the level of dialogue between different interfaith groups in the Rochester area, "Abrahamic Faiths: Models of Interfaith Dialogue in the United States (A Case Study of Rochester, New York)" was published in Peace-Building By, Between, and Beyond Muslims and Evangelical Christians, edited by Mohammed Abu-Nimer and David Augsburger, Lexington Books, 2009.

His work promoting interfaith dialogue was recognized at Doha International Interfaith Conference April 25-27, 2013. He has led intra-faith and interfaith leadership training workshops in Chad, Niger, Indonesia, Belgium, and other parts of the world.

He organized an international symposium, Sacred Texts and Human Contexts: Sacred Texts of Judaism, Christianity, and Islam in Uniting and Dividing Humanity June 23-25, 2013. The symposium brought together 150 scholars from around the world to enhance the work of interfaith, justice and peace, and document areas of common interest between the three communities.

Formal Charge of the Commission on Racial and Structural Equity (RASE)

In acknowledgment of national and local calls for systemic and institutional change, and in alignment with The City of Rochester and Monroe County's priorities for racial equity and social justice, the Commission on Racial and Structural Equity (RASE) is hereby charged to:

a. Inventory and assess current laws/policies that either promote or are intended to eliminate institutional and structural biases, racism and inequities in the City of Rochester and Monroe County

b. Provide recommendations to enhance current laws/policies to increase effectiveness, and/or "sunset” laws/policies that are ineffective or no longer applicable

- Provide recommendations on any new laws/policies which address "gaps” identified per "a.” and "b.”