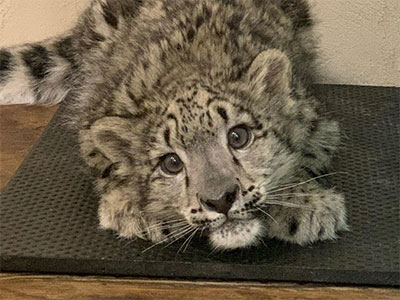 Voting will be open through October 4

Monroe County Executive Adam Bello and the Seneca Park Zoo have launched the online poll to decide the name of the five-month-old snow leopard cub. The three finalist names were selected from among more than 750 submissions made by community members over the summer.

“Thank you to the hundreds of residents who submitted names for our snow leopard cub naming contest,” said Monroe County Executive Adam Bello. “Now we need your help making a final decision. I encourage everyone to vote and look forward to seeing which name our community picks. I am grateful to the staff of the Seneca Park Zoo for their tremendous work making sure the little guy is thriving and healthy.”

The finalist names are:

Residents are encouraged to visit www.monroecounty.gov/snowleopardvote today through Oct. 4 to vote.

“We are excited to draw to the end of our naming contest for the newest member of our Snow Leopard family.  We have been amazed by the number of great names that were submitted by thousands of zoo guests,” said Seneca Park Zoo director Steve Lacy. “As the little cub grows and develops, he begins to express more of his own personality, and it has become clear that a few names really stand out as great names for him.  A couple of my favorite names made the finalist list, and their meanings seem to reflect some of the great characteristics of, not only the history of Monroe County, but the citizens who call the County home.  It seems fitting that as we celebrate the bicentennial of Monroe County, that the cub’s name would reflect one of the characteristics which make Monroe County an amazing place to call home.”

The five-month-old cub has been hand raised since birth by Seneca Park Zoo Assistant Director for Animal Care and Conservation Dr. Louis DiVincenti and other zookeepers. The cub was born to Timila, the Zoo’s 4-year-old snow leopard, and was hypothermic and dehydrated at birth.

This is an intensive process, and cubs neglected at such a young age are at high risk for illness. Fortunately, the cub has shown incredible progress thanks to the care and dedication of Dr. DiVincenti and his staff. Zoo staff will work with the Association of Zoos and Aquariums’ Snow Leopard Species Survival Plan (SSP) to identify the best opportunity for the cub.

“At 5 months old, and 22 pounds, the cub has grown into a normal, healthy, happy snow leopard,” said Seneca Park Zoo Assistant Director for Animal Care and Conversation Dr. Louis DiVincenti. “We look forward to giving him access to the public habitat very soon.”

This is snow leopard Timila’s second litter at Seneca Park Zoo with 10-year-old male, Kaba, as a result of a breeding recommendation from the Snow Leopard SSP. Snow leopards are listed as Vulnerable on the IUCN Red List of Threatened Species. In partnership with the Snow Leopard Trust, Seneca Park Zoo supports snow leopard conservation efforts aimed at addressing climate change, poaching, and human-wildlife conflicts.